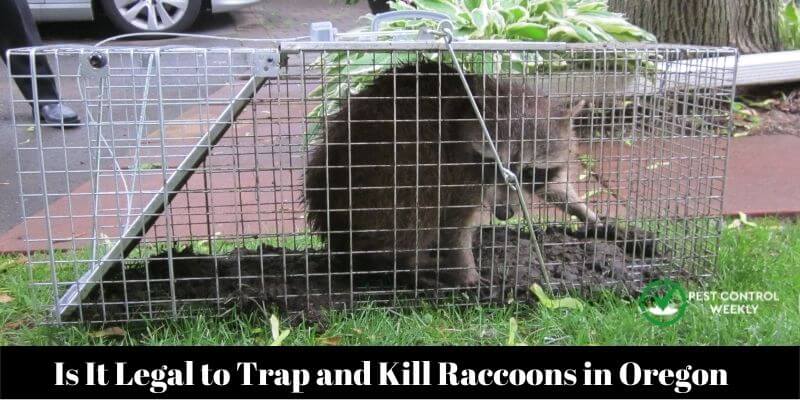 Raccoons are cute but the same time is nuisance animals. When you are failed to get rid of them in your living parts then you´ve no choice but to trap or kill them but, is it legal to trap and kill Raccoons in Oregon?

Yes, it is legal to trap and kill Raccoons in Oregon. Suppose you have a permit from the Oregon Department of Fish and Wildlife. State legislation protects raccoons, and moving these animals is against the law. If trapped, they must be either euthanized or released in the exact location.

In this article, we will read about a few Oregon laws regarding the trapping of raccoons. Moreover, we will also look at all the rules that allow one to kill a raccoon in Ohio. It is only permissible under certain conditions.

Is It Legal to Trap and Relocate Raccoons in Oregon?

It is against the law to capture raccoons that are a nuisance in Oregon without either killing the animal or returning it to the land where it was captured. If you hold a commercial nuisance wildlife control operator’s license and are in Oregon, capturing or taking live nuisance wildlife animals is legal. However, capturing or taking a nuisance animal is illegal if you don’t have a permit.

In Oregon, it is against the law to relocate raccoons because these animals are protected by state law. With an Oregon Department of Fish and Wildlife permit, raccoons may be captured, but they must either be released at the exact location or put to death.

A fur taker’s license is required b landowners to take down raccoons on their land. Relocating raccoons is unlawful, ineffective, and environmentally damaging.

Is It Legal to Hunt Raccoons in Oregon?

Raccoon hunting is legal if you have a permit or a tag. State laws protect these animals. Therefore, hunters ought to have a license. Failing to do may result in illegal conduct or a fine.

To take furbearers on property they own and live on, landowners must either obtain a fur taker’s license, a hunting license for furbearers, or a free license.

Before shooting or capturing fur-bearing rodents on their property, the landowner must get a receipt of registration for the site of such land from the Salem ODFW Headquarters office to receive the free license and brand number.

The Oregon Department of Fish and Wildlife requires all fur taker license holders and furbearer hunters to fill out and submit the Fur taker Harvest Report form. Online harvest reports are also available for trappers and hunters.

Except that unlabeled traps or snares may be designated for unprotected mammals by any person or member of their immediate family on land that they lawfully own.

All traps and snares, whether placed for fur-bearing or unprotected animals, must be legibly marked, or branded with the owner’s license number that has been designated by the Oregon Department of Fish and Wildlife.

Without a standard bill of sale, no branded trap or snare may be sold. Except for those that may be set for unprotected mammals by an individual on land that they lawfully own, all traps and snares must be legibly marked or branded with the owner’s license number assigned by the Oregon Department of Fish and Wildlife.

Any killing trap is established on land without the Oregon Department of Fish and Wildlife’s permission and has a jaw spread of seven and a half inches (7.5″) or more.

It is forbidden to disrupt or remove any licensed trapper’s set traps or snares while he is still setting them, except for those authorized to enforce wildlife regulations. No one is allowed to hunt any wildlife while operating a motorized vehicle.

An eligible disabled poacher may acquire an Oregon Disabilities Hunting and Fishing Permit to hunt from a vehicle, except for a while the vehicle is moving and on any public road or highway. This is an exception for landholders or agents hunting predatory animals on land they own or legally occupy.

You may use artificial lighting for hunting bobcats, opossums, and raccoons if it is not cast from or attached to a boat or motor vehicle. It is prohibited to discard any furbearer’s pelt unless the ODFW has given its permission. However, dogs may be used to hunt or chase raccoons and other vulnerable mammals.

How Can You Trap Raccoons in Oregon State?

In Oregon, there are many ways to deal with raccoon trapping, but live trapping is among the most common.

How Can You Shoot and Hunt Raccoons in Oregon?

Raccoons are small yet surprisingly resilient animals. Contrary to deer hunting, it’s advisable to stay away from shotguns and higher calibers. You can hunt them by:

Permit owners are allowed to kill and trap raccoons in Oregon. There are states applicable to raccoon hunting and trapping. Relocating raccoons is not a choice.

Raccoons that have relocated are swiftly replaced by new raccoons. Leaving the raccoons alone and getting rid of or changing whatever draws them directly to your yard is the best course of action.