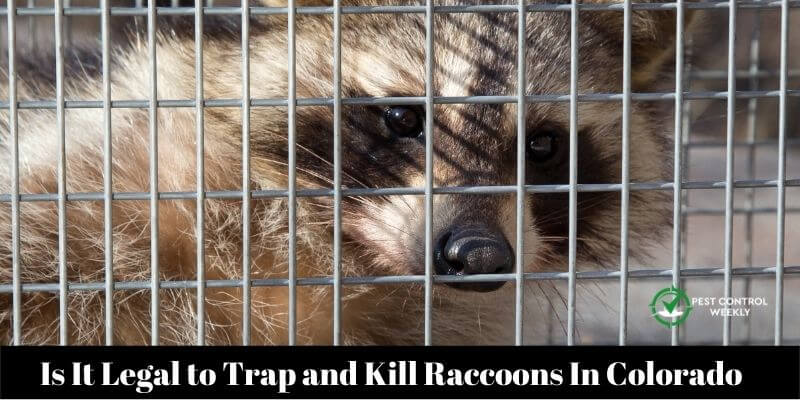 Raccoons are furbearer omnivores, they can eat meat, vegetable, fruits, and other edible things like humans. But they also create problems for residents and, people want to get rid of them, but is it legal to trap and kill raccoons in Colorado?

In this article, we will read about a few Colorado laws regarding the trapping of raccoons. Moreover, we will also look at all the rules that allow one to kill a raccoon in Colorado. It is only permissible under certain conditions.

Is It Legal To Trap And Relocate Raccoons In Colorado?

Raccoons can be trapped, but they must be transported within two miles of where they are trapped, according to the Colorado Division of Parks and Wildlife. Due to the possibility of contracting rabies, raccoons must not be mishandled by untrained people.

To remove raccoons that are causing harm, a special license is required. Raccoons might be moved. It cannot emphasize enough how crucial it is to call an expert because raccoons can turn hostile when intimidated or cornered.

WCR 17122(B) Removal of raccoons is permitted without a permit if: the new location will provide the species with suitable habitat. The owner or controlling organization of the property where the creature will be unleashed has granted permission.

Raccoons can be captured on private land in Colorado without a permit. However, in Colorado, it is forbidden to take wildlife using leghold traps, poison, body-gripping quick-kill traps, or snare traps.

Is It Legal To Hunt Raccoons In Colorado?

Raccoon hunting requires a furbearer or a small game license. The capturing, shooting or holding of animals declared to be state property or wildlife is prohibited by Colorado law.

On privately owned land, nighttime raccoon hunting with artificial light is permitted. Various legal ways to take animals are mentioned on the Colorado Department of Wildlife website. Still, the law also states that any way to take an animal that is not listed is forbidden.

The permitted means of taking furbearers are detailed under the furbearer’s section and include rifles or handguns, handheld bows, shotguns, traps, and crossbows.

Colorado laws are environment friendly and do not allow animals are killed unnecessarily. Still, some animals have considered permitting hunting because of the benefits offered to animals. Also, hunting is allowed when wild raccoons become harmful to human life.

Box or cage traps are the only live traps allowed. All wildlife that has been live trapped must be released immediately or removed using any authorized means.

A pan-tension device must be installed on all foothold (leghold) traps of size two or larger that are placed on land, and it must be set to minimal release pressure of 4 pounds as measured at the pan’s center.

It is essential to keep all the pads on cushioned jaw traps in good condition to reduce harm to the caged animal effectively. When trapping follows the terms of 33-6-205, C.R.S. or 33-6-207, C.R.S., any foothold trap or colony trap intended to be a drowning set may be employed as a drowning set. Except in a water set, killing traps with a jaw spread of 8.5 inches or greater may not be utilized.

Nuisance wildlife laws apply to raccoon shootings in Colorado state. A permit is required for killing raccoons. Legal methods must be applied to kill raccoons and must be done humanely. However, shooting or taking raccoons that are state property is prohibited.

The hunting time designated for raccoons is one-half an hour before sunrise and one-half an hour after sunrise. The traps and snares used for hunting must be checked once every year. At nighttime, raccoons are to be hunted. Use artificial light at night to take raccoons on private land.

Although killing a raccoon causing you problems is permitted in Colorado, you should only do it as a last resort. Other techniques exist for raccoon capture and relocation so they stop bothering your property.

How Can You Trap Raccoons In Colorado?

There are several ways in which you can trap Raccoons in Colorado. As per the laws, you can:

How Can You Shoot And Hunt Raccoons In Colorado?

Raccoon hunting demands people to be vigilant, considerate, and patient and to apply suitable approaches. The legal ways of hunting raccoons are by:

Killing and trapping of nuisance raccoons are permissible in Colorado state. However, there are specific rules and regulations of the state that you must abide by. Failing to do so can result in acceptable and illegal conduct.

A licensed person is allowed to kill raccoons if they mean to cause you harm. You can always report the authorities and have them come over to look at your raccoon problem. Before you trap or go hunting, check your local laws.