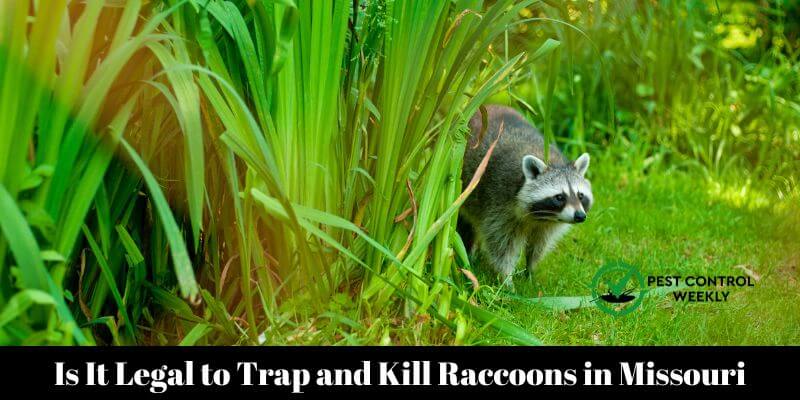 In both urban and suburban parts of Missouri, the raccoon is widespread. Their inquisitive attitude, propensity for hiding out in attics, and constant search for food can result in disputes with property owners. There are laws regarding capturing raccoons in every state but is it legal to trap and kill raccoons in Missouri?

Yes, it is legal to trap and kill raccoons in Missouri. According to Missouri Code, you don’t need a permit to kill or capture raccoons that cause harm when the season is off.

In this article, we will read about a few Missouri laws regarding the trapping of raccoons. Moreover, we will also look at all the rules that allow one to kill a raccoon in Missouri.

Is It Legal to Trap and Relocate Raccoons in Missouri?

In Missouri, there are set hunting and trapping seasons for raccoons since they are considered protected furbearers. However, there are several situations where landowners can limit furbearer damage.

Raccoon trapping is legalized in Missouri. Trapping is a practical method for getting rid of pest animals. Property owners may engage furbearer hunters who may trap during the designated furbearer season at any time of the year, or they may trap troublesome wildlife themselves, following Missouri’s Wildlife Code.

According to the Missouri Department of Conservation’s wildlife control guidelines, relocation is not advised. An animal that causes damage must be appropriately disposed of after being captured. We do not advise relocating, even though it could seem like a good idea.

Is It Legal to Hunt Raccoons in Missouri?

Hunting raccoons is legalized during hunting seasons. No hunting license is required for taking down raccoons. Traps may be utilized from August 1 through October 15. March 1 through April 14 is longer for trapping on private property.

During the permitted hunting season, raccoons are permissible prey. Contact the Missouri Department of Conservation to find out the dates and locations of the hunting season.

Raccoon shooters are restricted to any number of raccoons each day. There is no possession limit of raccoons for hunters. Licenses for Missouri’s hunting seasons are accessible online and through the Department of Conservation’s mobile app to keep hunting in the state as simple as possible.

Furbearers’ houses, dens, or nests must not be damaged or destroyed. No one can accept payment for animals someone else has taken. Only the user is allowed to kill or remove wildlife.

Except for colony and killing-type traps, which need to be examined every 48 hours, wildlife must be taken out of or released from traps every day.

Traps cannot be placed on roads created by or utilized by domesticated animals or people.

The Missouri Department of Conservation publishes and enforces all hunting seasons, hours, licensing requirements, and bag limitations (MDC). Shooting at raccoons is possible with common weapons, typically a rimfire. Check with the police in your area before using a gun.

Hunting season for raccoons allows shooting raccoons. If dogs trap raccoons, artificial lighting is permitted when hunting them. According to Missouri law, landowners are free to use firearms at any time to capture wildlife that is actively damaging their property.

Without the owner’s consent, or in the absence of the owner, it is illegal to launch any firearm, or a muzzleloader to pass because of that discharge, within 100 yards of a building.

How Can You Trap Raccoons in Missouri State?

The following guidelines must be followed when trapping raccoons:

How Can You Shoot and Hunt Raccoons in Missouri?

Shooting and hunting methods are:

If you have a valid hunting license and use a humane technique to kill the raccoon, it is legal. Without a permit, it is illegal to use poisons and it is not advised to employ leg hold or body grasping traps for raccoons.

Before implementing any deadly control measures, check the local ordinances. Never use a firearm inside the boundaries of a city or in a neighborhood. Raccoons are vectors of rabies, so it is better to get professional help to get rid of them on your property.