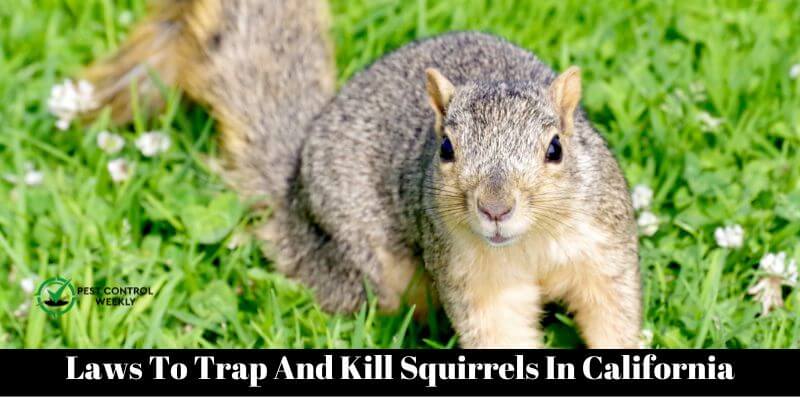 Squirrels are cute yet nuisance animals are damaging your lawn, house stuff, and more. In the end, you have no option but to trap or kill them. However, every state in the United States has different laws to deal with these creatures. You must be curious what are the laws to trap and kill squirrels in California.

No license is needed to trap and kill squirrels if the owner or tenant wants to trap them.  But a trapping permit is needed from the California Department of Fish and Wildlife if someone wants to catch squirrels for hire or to make money.

Some squirrel species in California are game animals that can’t be hunted, trapped, or killed without a permit. Each state has its own laws regarding the hunting and trapping of squirrels. This article will help you understand California’s legal requirements to trap and hunt squirrels.

Five distinct species of squirrels can be found in their natural habitat in California. The types you’ll see mostly depend on where you live. Therefore, let’s learn about the California squirrel species.

The western grey squirrel is a tree squirrel indigenous to California and can be found across the state. It can be identified by the main grey color of its fur on its sides and back, as well as the striking white coloration of its underparts.

Another species of squirrel that can be found in the state of California is the native Douglas squirrel, which is also known as the chickadee. Most of them live in the pine forests along the northern coast and the mountainous areas near the Sierra Nevada range.

Ringworm, typhus, salmonellosis, tularemia, and other infectious diseases are among the most widespread illnesses. By means of direct contact, such as bites from sick squirrels, these diseases can be transmitted from animals to people.

Which Types Of Squirrels Are Legal To Hunt?

According to the state department of fish and wildlife, it is legal to hunt, trap, and kill tree squirrels in California:

The general hunting season for squirrels in California runs from the 2nd Saturday in September until the last Sunday in January. Starting on the 1st Saturday of August and ending the day before the regular season begins, archery and falconry enthusiasts in California can go squirrel hunting.

Most states only let people hunt grey squirrels in the winter, which is good because it’s the safest time to hunt and kill squirrels. They have fewer parasites to deal with now that ticks and other pests are less active.

The California Fish and Game Code says that squirrels are mammals that are not used for trapping. When nongame mammals cause damage to crops or other property, the owner or tenant has the right to control them in any lawful way.  The following are California’s squirrel trapping laws:

Laws Governing Shooting and Hunting Of Squirrels In California

If you want to hunt squirrels, you need a license, which you can get from the California Department of Fish and Wildlife website.

How Can You Shoot And Hunt Squirrels In California?

With a hunting license, you can shoot different squirrel species in California during the archery and falconry seasons and the general season. If you stay in the open zone, you don’t need any other permits to hunt squirrels in this state. A variety of firearms are suitable for hunting squirrels.

In California, squirrels can be shot effectively with a. 22-caliber rifle or a.12-gauge shotgun. If you’re looking for the most outstanding caliber for squirrel hunting, go no further than the.22.

While the.177 might be a touch more accurate or silent, the Game technology in a.22 can be just as lethal and quiet as it is accurate.

Is It Legal To Shoot Squirrels with a Pellet Gun in California?

Getting rid of squirrels by trapping or hunting them is not ideal, but it may be the only viable option. You may attempt this if you have a valid license to trap squirrels. Capturing a squirrel in California is not illegal. Relocating them without permission is against the law.

When the property owner or renter takes care of ground squirrels in California, they don’t need a license. You can get the license you need to hunt squirrels at the California Department of Fish and Wildlife.