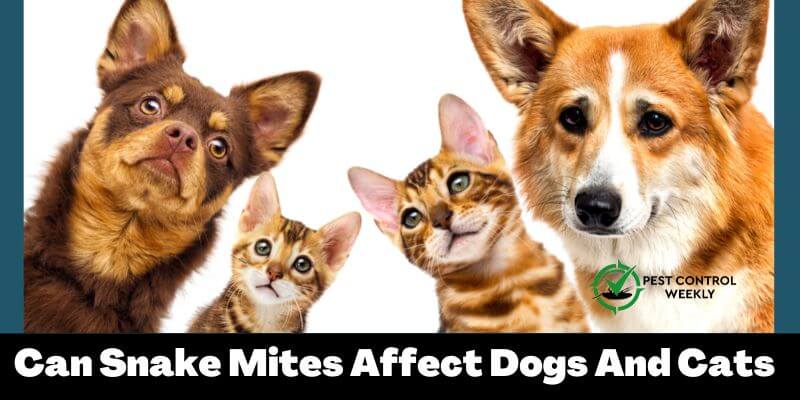 There are hundreds of parasites that can infect reptiles. In the case of mites, more than 250 known species can cause an infestation in reptiles, including snakes, but can snake mites affect dogs and cats?

No, snake mites do not affect dogs and cats. The number of mites multiply on snake bodies by manifold and cannot spread to other nearby animals like dogs and cats. Infestation can only occur in one condition if your pets are already infested with mites.

In this article, we will read about snake mites and how these mites can affect your pet animals. We are also going to take a look at the preventative measures so that you can protect your animals.

Why do Mites Prefer Snakes?

Mites prefer snakes over other reptiles. This is because a snake’s skin is more susceptible to mites than other reptiles like lizards or geckos. The mites usually face trouble in accessing the lizard’s skin.

Snake mites are tiny arthropods that have been studied widely by researchers. In 1975, it was documented that a human family suffered from snake bites, and the snake was infested with mites. As a result, people suffer from skin diseases like scabies as well.

Although this is rare, contact with humans is possible. The likelihood of coming in connection with a cat or a dog is even more as they both reside in the wild among wild snakes and mites.

Can Snake Mites Transfer To Dogs?

This also gives us proof that mites are species-specific arthropods. That means that even if an infested snake comes near your pet animal dog, the chances of infestation are low. However, the transfer becomes possible if clothes are involved or the same living area is involved.

Moreover, if your dog is already suffering from mites, this transfer becomes relatively easy, and the mites can leave one host to adjust to the other. Overall, the chances are pretty low of this happening.

The answer is both yes and no. The snake mites can spread to other animals and surfaces as the mites are mobile and can spread through contact among the animals who already have mites.

For instance, if the red mites are present on the chickens and the snakes live near their coops, having snake mites. In this particular scenario, the transfer of mites is relatively easy, and the infestation scale will be massive.

How Do You Get Rid Of Snake Mites In Your House?

Snake mites are dangerous, and you need to get rid of them as soon as possible. Not only are you putting yourself at the risk of infestation but also your pet animals as constant exposure is there. You can work on a few methodologies to get rid of snake mites:

Usually, the snakes dig holes in the ground and disappear. You need to find these enclosures and then wash them with water. Please add detergent during washing. This will help in getting rid of the mites lurking behind.

Mites need a temperature range of 20-23 C for multiplying, growing, and thriving. The eggs particularly need a temperature of 20 C for hatching. The humidity conditions needed are 85%, while for the larvas, 75% is required for their molting process to complete.

If you increase the temperature conditions or wash the area with very hot water, you will be able to succeed in getting rid of snake mites once and for all. Also, dry conditions can help you with the mite-eliminating process.

How Can I Tell If My Snake Has Mites?

Mites are ectoparasites, and they feed on the blood from an external surface. The presence of mites can be confirmed visually, for they are just very small insects that can be seen crawling the skin of the snakes.

Particularly for snakes, dark specks can be observed on the slimy skin, and the legs of mites can be seen visibly. If the mites are in their adult form, they are seen as pepper flecks. The mites can also be confirmed through the symptoms experienced by snakes.

The snakes show signs of restlessness as they experience anemia. The body color of the snakes starts fading away, and they show signs of agitation. Some snakes also become aggressive as they feel constant itching and can do nothing about it.

How Long Does It Take To Get Rid Of Snake Mites?

Mites are a nuisance, and it is not easy to get rid of them quickly. To eliminate them, you must consecutively apply different treatments for at least two to three weeks. In some cases, they die sooner rather than later.

Here is how you can get rid of them faster.

The enclosures should be washed with diluted bleach or all-purpose cleaners like Clorox. Sometimes the hospital grade and veterinary cleaners are practical too. The mites must stop laying their eggs.

All you have to do is leave the bleach in the enclosures, and the mites will start dying on their own as their membranes will get ruptured. Pyrethrins and pyrethroids are some of the pesticides that can be used is; Clorox is not available.

You can also purchase various sprays that are effective in getting rid of the mites. All you have to do is make sure that there is no way of re-introducing the mites back in the enclosures. This will keep both your pet animals, cats, and dogs, safe from infestations. The use of Organo-phosphates has proven to be effective against snake mites.

Where Do Snake Mites Come From?

The snake mites are able to spread through direct or indirect contact from the already infested enclosures as well as animals. They spread in a chain-like manner. One from another. The substrates are also responsible for the spread of mites.

It is better to get rid of that particular infested snake altogether and empty out the enclosure, but many people will find that difficult to do so. It is better if treatment options are opted for, but if the situation is getting out of hand, you need to get rid of the source of the problem.

Some animals are natural hosts for the mites, like the pythons. Snake mites prefer sticking to them, and it is quite rare that they will shift to another species. Snakes can tolerate a moderate to low level of mites but will die out on their own if the threshold exceeds.

Once the mites have been confirmed in your animals, you need to get rid of them as soon as possible. The snakes can transfer these to other animals. One way of removing mites is removing that particular animal from its enclosure and soaking it in warm water, 75 to 85 degrees.

The water level should not be intense as you do not want to risk drowning the animal in it. In the case of cats, the cats are afraid of water, so you have to tame them a little bit so that they become accustomed to the changes in temperature.

The animal should be soaked in for about 30 minutes daily to get optimum results. You should repeat the step for several days. The insecticides available should not be directly used on the animals as their toxins will harm them.

They can only be applied to areas and should be well-ventilated. The use of oils like mineral oils or olive oils is suggested for dislodging the attached mites. These oils can be used on both cats as well as dogs.

How Do You Prevent Snake Mites?

The snake mites do not usually affect cats and dogs but they can be transferred from one animal to another if the contact is close and the other animal is already infested with mites. Distance should be maintained so that each animal is kept afar from another.

You can take measures to prevent the infestation of mites as well as take preventative measures so the reptiles can be saved as well. The other animals can be protected if sanitized measures are taken timely. However, you should keep a close eye even after performing the curative methods.